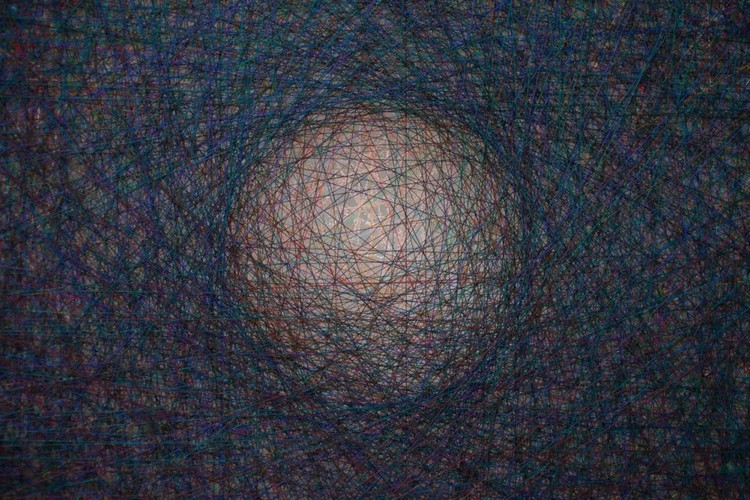 Then there is the truly elegant display of work from the last year by Pennsylvania-based artist Emil Lukas at Sperone Westwater Gallery. Although not widely known in the United States, Lukas has shown his work throughout Germany, France, Switzerland, and Italy, including as part of the renowned Panza Collection in Varese.

Lukas “paints” his so-called thread paintings, to which half of the show is devoted, by drawing intricate skeins of various colored polyester threads across his canvases.

(The show also comprises one other series, what Lukas called his “larvae paintings.” Jeff Koons’ dozens of studio assistants cannot compare to the millions of fly larvae Lukas lets loose to eat patterns as they will into freshly painted canvas.)

These thread paintings can read like musical instruments, nearly throbbing with a tympanic tautness. Five of those on view have a glowing circle-within-a-square motif that seems to invert Anish Kapoor’s widely exhibited, seemingly floating, two-dimensional, fiberglass wall sculptures. The luminous orbs in these five works appear to be lit from within. Like James Turrell, Lukas can seem like an illusionist, optimizing light, color and the shifting angle of the viewer to create a unique and elusive optical experience.

Unfortunately, as Lukas said when we toured the gallery minutes before the show’s opening, “Historically I make work that is impossible to photograph.”  He’s right on this count. No image I’ve seen has been able to capture either the ethereal luminosity or complexity of craftsmanship of the thread paintings.

In the exhibit’s accompanying catalog, Lukas noted that he was “first attracted to thread” when traveling in Germany in the late eighties where he remembers seeing huge racks with hundreds of spools in different colors on display in garment stores and drugstores. “The dramatic visual effect fascinated me.”

“For me the thread paintings are about color. They’re about compositions of color, light, reflection, and opacity. They’re much closer to formal wet-on-wet watercolor paintings than they are to anything in the textile field.”

That rings true, because despite the materials, there’s nothing artsy-craftsy about these works. If, like me, you’ve ever admired the artistry of a handmade drum or marveled at the inside of a piano, you will especially like Lukas’ work.